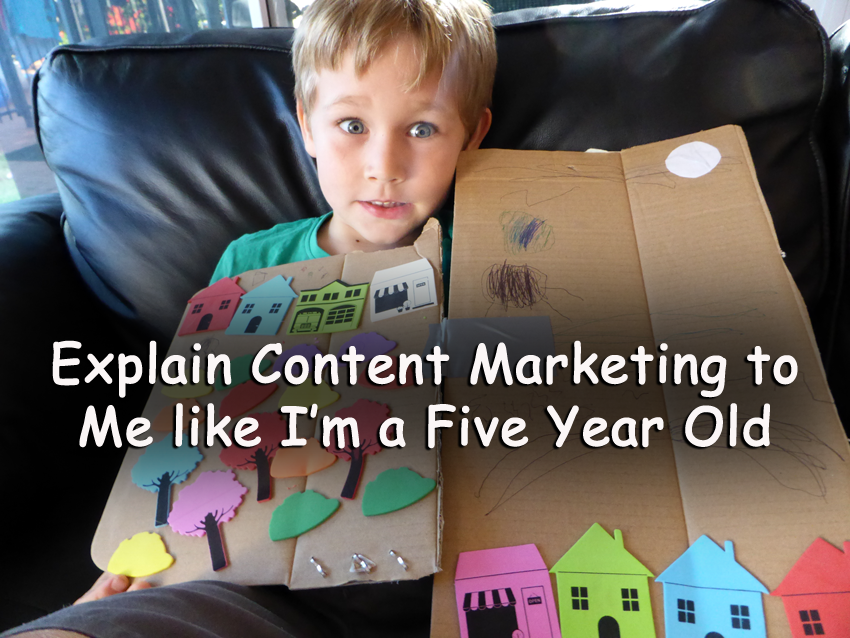 Content Marketing, like SEO it’s one of those things people know they need but have too many questions that they’re afraid to ask. Here’s a little case study to explain content marketing, its benefits and best practices to help you hit the ground running.

Content marketing is the practice of producing valuable content for the right audience, at the right time, in the right format – and then amplifying it to ensure they see it. Most businesses do the basics – write a blog that answers a particular question and then share it on social media. If you’re doing this well, you’re already a budding content marketer. If you’re doing this but it’s not driving sales and interest in your brand, you might be just a few changes away from greater success.

Meet Jack, a five year old content marketer from Brisbane. Jack had a problem. His favourite movie of all time is E.T. but very few of the kids in his prep class had seen it. He wanted to play alien games at lunch time but nobody was aware of, or interested in alien play. Jack defined his problem and then set about creating a strategy to solve it.

Jack’s desired outcome was encouraging a core group of his ideal market to take an action that would lead to both hard and soft conversion goals.

There’s an old adage in advertising – speak to everyone and nobody listens, speak to one person and everyone eavesdrops.

Content marketing works best when delivered to a narrow, invested audience. The message must be wholly targeted to their needs, problems or aspirations. That isn’t to say that all content should be so specific that only a handful of people care (this kind of content is best delivered in a one on one way such as a sales pitch or email) – but that it delivers a valuable idea to all those with a common problem.

Delivery is very important. Your content needs to find the audience where they are. Unlike advertising, content marketing doesn’t seek to “tell” them to take an action, it seeks to inspire them to come to you. This is why the term “inbound marketing’ is used to describe combinations of content marketing activities.
Jack’s desired action was getting kids in his prep class to ask their parents to hire/download/stream the  E.T. movie. He knew that the E.T. product was good. He knew that they’d love it and that it would lead to sign ups to his lunch time games.

Getting them to watch it was the issue. He could tell them directly to watch it, but there’s so much noise in the kid movie marketplace – how does a product that is proven to be great but is relatively unheard of in this marketplace have a chance? How does it compete with the big ticket Pixar movies when it’s far less glamourous and sophisticated? He told them it was good, his best friend (and PR agent) told them it was good, but 983740 ads have told them that the shiny new blockbuster is better.

Clever content that “nails” your audience’s pain point or aspirations will always fare well, even against showy paid ads. There’s a reason completely unheard of brands have millions of Facebook followers – they nail content. There’s a reason that so many small businesses derive 75% or more of their sales converting visitors via their blog and social activity – they understand their audience and the platforms they use to market to them. It’s below the line, one-on-one marketing at an epic level.

Jack planned his campaign well. He set about looking for opportunities to reach his ideal audience at the right time, where he would be positioned as someone worth listening to. He chose to save up his campaign for his allotted “show and tell” day – an optimum time for exposure. This choice meant:

Jack created his own picture book that told an abridged version of the E.T. movie, including the forest landing, the shed scene and all aliens. He took this to school for show and tell and “read” it to his class. Not once did he try to sell the idea of downloading or buying the film. Not once did he tell kids to play aliens with him. He never tried to explain content marketing goals to them. He never tried to sell a single thing to the kids. The results?

Of course, Jack didn’t actually create and execute a content marketing strategy – he’s five. He did however demonstrate that content marketing, without the marketing, is a powerful tool for generating sales and leads. It was in fact, his lack of sales experience that made the content so powerful. His enthusiasm, knowledge and desire to create a fun experience for his peers is what made the execution so perfect. Great content marketing can’t be explained – it is about feelings and understanding. Be passionate, know your passions inside and out, lead others into passion and your content will do the rest.

Read more about being a great content marketer here.