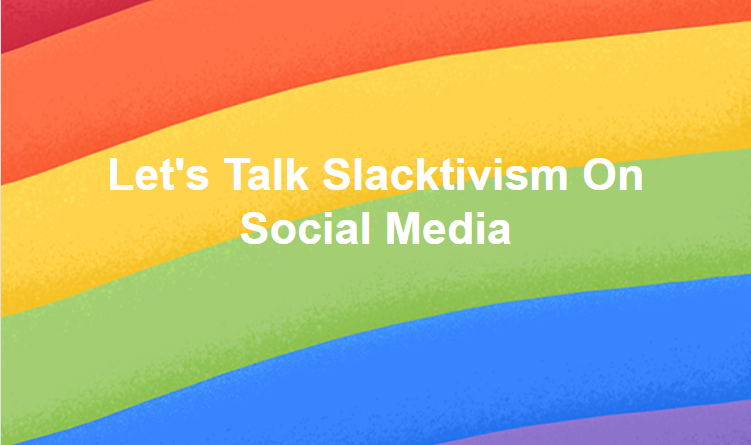 Right now, Australia is voting about gay marriage.  There’s a lot of “discussion” about it on social media.  When I say discussion, I’m really saying… shit fighting.  It’s social media.  There’s not much in the way of discussion really – there’s a lot of ranting, yes.  There’s quite a bit of name calling, there’s tantrums, threats and outpouring of anger… all part of the process of social change.  There’s also slacktivism.  Slacktivism is social media’s equivalent of buying the t-shirt when you didn’t go to the gig.  It’s wearing the brand because you like the ad.  It’s showing your passion without actually having any passion… and the rise of slacktivism on social media has been branded both dangerous and heroic, depending which side you lay your minimal “fucks to give”.

TL;DR: Yes, it’s a long rant so I’ll do a quick summary

Slacktivism is doing the minimum possible to feel part of the solution to a problem.  On social media, it’s usually about adding a sticker to a profile picture or clicking share on a political post.  Social media is designed for slacktivists.  The objectives of the Facebooks and Instas of this world is to get brands (the cause) in front of people as a means to make money and to collect data on users (slacktivists) to better sell to advertisers.  When a user shares branded content, they’re essentially slacktivist marketers for the brand, and the brands are lining up to make that happen.  As a happy, or not so happy (we’ll come to that) side benefit, slacktivists can now “share” their brand of politics, without actually engaging in any kind of activism – also known as slacktivism.

Why is it so controversial?

Slacktivism means skimming the issue at the shallowest level.  I agree that Donald Trump is a douchebag, therefore I will share this news story about him being a douchebag without even reading it.  I won’t research it to verify that it’s legit because he is doing something douchey and that fits with my personal reflection of who he is.  Bad example maybe because there’s a fair chance that content around Donald Trump being a douchebag is 100% legit… but still, it’s sharing political content with no fact checking.  Donald Trump is the king of “fake news” – creating it, tweeting it, crying victim about it… and slacktivism is the ideal medium for spreading it.  Whether it’s the goings on at Mar-A-Lago or the healing properties of coconut oil (there are none as far as science is concerned), slacktivism encourages a culture of ignorance.  When the issue is serious – serious as cancer, for example – slacktivism can feel insulting and uncaring.  When it’s life endangering information that is blindly shared (hello Mr Avocado Wolfe if you’re reading) it can lead to cultural shifts which are actually very damaging… as a side note, vaccinate your kids.

The 10 second news bite….  when broadcast “journalists” have one task… to go to the press conference and record the sentence that sums up the whole debate in a single, quick news bite.  TV news has always been reductive in its exploration of topics because air time is expensive and ads are profitable and they need to fit the feel good kitten story in at the end.  Enter Twitter and it’s 140 characters.  Enter Facebook and its fight for reach.  The newsfeeds roll by at lightning pace and the you just keep scrolling.  Scroll on sisters and brothers, ain’t nobody got time for careful consideration of an issue.  Even if you did, which issue?  The posts keep coming.  From friends, brands, not for profits, political groups – the never-ending overwhelm of information – where do you even start to take on a passion project?  Enter Slacktivism.  The gay marriage debate is the rainbow coloured sparkly poster child for slacktivists everywhere.  Everyone is “passionate” about it, be it a yes or a no vote, everyone cares and everyone wants their opinion known.  Not enough to volunteer at an activist organisation.  Not enough to do outreach to suicidal gay youth.  Not enough to join their churches in campaigning on the streets and in the letterboxes…. just enough to change their profile picture on Facebook.  BAM.  I’ve done my bit.

So is there a place for slacktivism or is it just bullshit?

For gay youth, seeing “no” campaigners being slacktivists is probably upsetting and the rainbows are probably empowering so the impact of slacktivism is probably quite real (sadly youth is not part of my demographical description so I won’t speak on behalf of them).   The impact on the key players aside, slacktivism is a real part of social media and in my opinion, despite the terrible impact it has on the pursuit of knowledge and the future of humankind, there’s a place for it on social.  I know, my uni lecturers, my credible journalist friends, my angry student radio buddies… I have forsaken you but hear me out.

Homophily.  Love of the same.  Birds of a feather flocking together behind a cause.  Social media feeds the relationship need.  The desperate desire to be one of the cool kids. To be influenced and to be an influencer.  Slacktivism gives users a flag to fly that says “I love the same as you, accept me”.  When all your mates are yes voters, you want them to know you’re a yes voter too.  But what happens when six of your mates are no voters?  They’re out there in the cold, not one of the cool group.  They might have lots of no voting friends on their list who are putting up the “anti-rainbow” flag and sharing the (really weird) no campaign housewife video (WTF was that even supposed to be about???).  But they’re seeing your stuff.  They think you’re cool.  They think you’re part of the cool group and yet here you are, flying the rainbow flag profile picture.  You and ten other ‘influencers” on their friends list.  People they respect.  People the like.  People they want to be like.  So suddenly, the rainbow flag is a brand and they must choose to rebel against it and lose their place in the cool kids group.  That’s a big social ask.  What’s a poor homophobe to do?

They have choices… they can be out and proud about their no vote.  They can wear the persecution like a badge of honour and fight the good fight for their right to hinder people’s rights.  Brave.

Or they can hide their intentions to vote no.  This means staying quiet on the issue.  This reduces the homophilic benefits of being cool in the gang of no voters but culturally, those guys are the chess club anyway.  Stay quiet, keep your head down and just vote no when the time comes.  Ask the Donald Trump voters, this is the easiest way out.  By taking this way out, the “no” side has less visibility, less cultural impact, less viral potential – and less predictability.  When the vote comes in, there will be a surprisingly high no vote that “nobody saw coming” – like all the slack jawed disbelief the day that Trump was voted in…

This lack of social virality means bigger media spends for the no team.  It means more letterbox drops and more visibility through expensive means.  That’s inconvenient for them.  On the other side, it empowers the yes voters to express their opinions, to support the gay community, to identify as “not a douche”.  It makes an army of gay rights supporters who never really thought about it before and who will go right back to not giving their fucks as soon as the issue is boring again.  So does slacktivism even leave a legacy behind?  Remember that time someone shared a heart on their wall to raise awareness about… some… what was it… some bullshit?  Nope?  Is there anything at all that comes from slacktivism?

So the voting isn’t in at the time of this rant and when it is, slacktivism won’t be the deciding factor in who won and who lost.  There’ll be a lot of self congratulations on the winning side where sharing that meme made all the difference and I played my part in defeating the other team.  The question is, is there any truth to that?

Slacktivism, like it or not, plays a part in social change…

Slacktivism on social media is going to happen.  It’s going to happen everyday in every feed.  It’s sharing an image on Instagram.  It’s retweeting a cool quote.  It’s adding a sticker to a Facebook profile image – or the worst… forwarding chain mail about sharing emojis for a cause (nothing makes me stabbier).  For most slacktivists, taking it to next level could be as simple as first checking Snopes to make sure that the info is correct.  It might be a case of not just sharing a rainbow image, but sharing credible information from a credible news source.  It might be about reading a few articles so you understand the debate and can contribute in a meaningful way.  It’s not hard to take Social Media slacktivism to the next level – and actually BE THE CHANGE YOU WANT TO SEE IN THE WORLD… not just regram it.

Print Media.  Don’t spend a penny on print unless you understand how it works.  Here’s our guide to getting ROI from traditional magazine advertising.

Grammar police are EVERYWHERE on social media.  The biggest grammar crime isn’t misuse of there, their, they’re… it’s about proper debate on socials.  Is your love of correct grammar ruining discourse on important topics?  Learn more here.

How Kikki K sucked lemons and Lush made lemonade!  Lush uses social media to generate great PR opportunities.  Learn from an example of how to use changes in your industry to generate good will for your company.